A new Mesonet.org is coming soon!
Try the Preview

A May To Remember

In a state so accustomed to highly variable and often tumultuous weather, May 2013 will be long remembered as one of its most notorious. The month began with some of the coldest late-spring weather in the state's history and finished with a flourish of violent weather, including one of Oklahoma's worst tornado disasters on record. Stirring the echoes of May 3, 1999, for many central Oklahoma residents, a massive and violent tornado churned its path of destruction from near Newcastle through south Oklahoma City and Moore before dissipating near Stanley Draper Lake. The tornado reached EF5 level, the strongest category on the Enhanced Fujita Scale. The tornado had winds estimated at over 200 mph and reached a maximum damage width of 1.3 miles. State officials confirmed 24 fatalities due to the twister. The storm injured over 300 others with preliminary damage estimates totaling over $2 billion along its 17 mile, 40 minute path.  The twister destroyed two Moore elementary schools, killing seven schoolchildren at Plaza Towers elementary and injuring many others.  One day previous to that event, a violent twister traveled from east Norman to near McLoud causing two fatalities. That tornado was rated as an EF4. While numbers are still preliminary, the National Weather Service counted at least 19 tornadoes between the two days. Officials from the Oklahoma Department of Emergency Management estimated that the two-day barrage impacted 2937 homes, businesses and non-residential buildings. The severe weather was far from over, unfortunately. May's final three days saw a flurry of dangerous weather, culminating on its final day. A large tornadic supercell spawned several tornadoes from El Reno to Moore to southeast Oklahoma City. A preliminary count of nine fatalities from those tornadoes, including two children, brought the year's tally to at least 35. That ties 2013 with 1960 as Oklahoma's second deadliest tornado year since 1950, bested only by 1999's 42 fatalities. The stationary supercell produced prolific rainfall amounts across Oklahoma City and resulted in widespread flash flooding. At least two deaths were blamed on flash flooding from the event, with more possible as searches continued.

May saw a continuation of the cool weather and drought relief the state has experienced since mid-February, although western Oklahoma and the Panhandle remained parched. According to preliminary data from the Oklahoma Mesonet, the statewide average temperature finished at 66.8 degrees, more than a degree below normal. May was the fourth consecutive month to finish with below normal temperatures, a feat not seen in Oklahoma since the four month period between December 2009 and February 2010. The below normal finish was mainly due to a cool first half of the month, particularly during the first week. A freeze occurred across western and northern Oklahoma as late as May 3, with temperatures dropping into the 20s as far south as the Red River. Up to 2 inches of snow fell across northeastern Oklahoma on that day, the latest snowfall on record for many locations. Tulsa recorded its first ever May snowfall with a trace on May 2. Numerous records were broken for lowest minimum and lowest maximum temperatures during those first few days of the month. The climatological spring season of March-May finished with a statewide average temperature of 56.2 degrees, nearly 3 degrees below normal, to rank as the 11th coolest on record.

The precipitation totals across the state only added to the month's tarnished legacy. The Mesonet site at Hooker in Texas County recorded a measly 0.08 inches of rain for the month, the second  lowest May total for that Panhandle town since records began in 1906, just 0.04 inches behind 1916's 0.04 inches. On the other end of the scale, Oklahoma City experienced its wettest May on record with a whopping 14.52 inches of rain at Will Rogers Airport. That total becomes Oklahoma City's second wettest month on record, eclipsed only by June 1989's 14.66 inches. Combined with March and April, Oklahoma City's spring total balloons to 23.18 inches, besting the previous wettest spring mark of 20.31 inches from 1947.

According to data from the Oklahoma Mesonet, the statewide average rainfall total for May was 4.9 inches, about 0.3 inches below normal. That ranks the month as the 54th wettest since 1895. A band from south central through central and northeastern Oklahoma recorded from 9 to 11 inches of rainfall. Most of the western third of the state recorded less than 2 inches, however, with much of the Panhandle seeing less than a quarter of an inch. Although the spring season had a rather unremarkable statewide average at 10.65 inches, about an inch below normal, the stark contrast between western Oklahoma and the rest of the state was evident in the details. The Panhandle experienced its fourth driest spring on record while central Oklahoma had its 15th wettest.

The exaggerated moisture difference produced obvious changes to the U.S. Drought Monitor by month's end. Extreme and exceptional drought increased through the western third of the state while drought was eliminated across much of central and eastern Oklahoma. May's final Drought Monitor map showed about 41 percent of the state being drought free, but 27 percent under the extreme-exceptional categories.

The June outlooks from the Climate Prediction Center (CPC) indicate increased odds of below normal precipitation and above normal temperature across western Oklahoma, particularly in the Panhandle. The outlooks are inconclusive across the rest of the state. The outlooks for the summer season call for increased odds of below normal rainfall across the western half of the state and above normal temperatures over all of Oklahoma. CPC's latest U.S. Seasonal Drought outlook predicts improving drought conditions across most of Oklahoma through August with the exception of the extreme western third of the state and the Panhandle. Drought is expected to persist or intensify in those areas.

May 2013 Rainfall Totals from the Oklahoma Mesonet 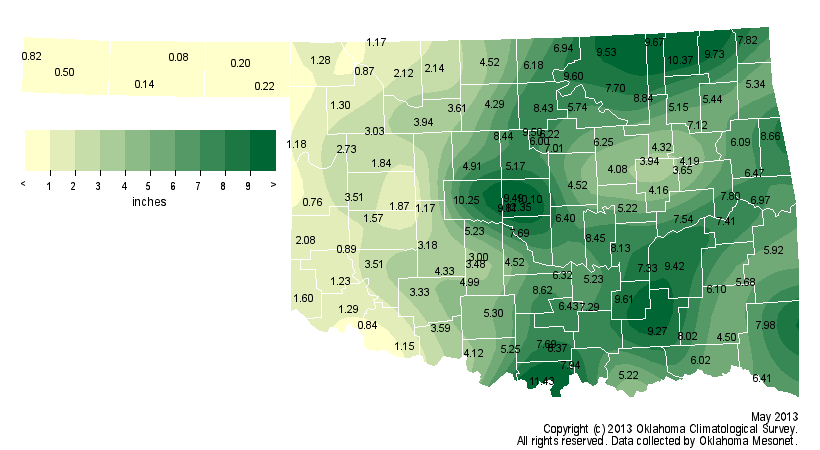 June temperature and precipitation outlooks from the Climate Prediction Center